The first use of airsoft guns was in the early 1980s in Japan. During those times, airsoft guns were limited to coil spring-loaded piston air pumps that were manually cocked to shoot the BBs out of the barrel. Since then, these guns have been used in different activities in various countries.

Airsoft guns are used for exciting activities, such as skirmishing and plinking. They could also be used for law enforcement or military training to enhance shooting skills. Furthermore, airsoft guns are a common prop in the film industry.

Despite being known for combat sports, there are several more uses for airsoft guns. But for now, we can focus first on the four typical uses. For detailed insights about them, continue reading down below.

Airsoft guns are used for a variety of applications ranging from recreational to exercise drills.

No other gun replica in the market can provide an exact feature of a real weapon, while at the same time being as safe and reliable as an airsoft gun.

Call them skirmishes, combat sports, war games, or whatever you like, these are the most popular uses for airsoft guns. They have even taken the top spot from paintballs as the preferred weapon for war games. And, speaking of war games, you can choose from numerous of them, usually played in teams.

This is the most common war game played using airsoft guns. It requires two teams with an agreed number of players and a specified role for each player. No durations are set for the entire game. The game will only stop when all the players in one team are eliminated. The team with the most players standing is the winner.

This is another typical skirmish airsoft game played by two teams. To start the game, each group has its own territory and a flag. The game’s objective is to capture the flag from the opposing team and bring it back safely to their own territory.

Players can tag or capture opposing players when they are not inside their own territory. Jailed players can still be freed by their teammates, but they cannot capture the flag until they return to their area. The first team to safely capture the flag without getting caught is the winner.

This game should only be played by two teams: cops and robbers. The players between the cops and the robbers should not be more than forty to sixty ratio. The game is like a Team Deathmatch played in a big structural building with an added twist in the objectives.

The game’s main objective is for the cops to prevent all the robbers from escaping with the loot bag. To win, cops can either eliminate all the robbers or take the game loot bag back to the respawn site of the cops.

The robbers need to bring the loot bag safely to the designated escape site to win the game. If any of the players is shot while holding the loot bag, they need to drop it where they get hit.

The escapees need to reach the designated safe house without getting shot. In contrast, the hunting group’s aim is to eliminate all escapees before they get away.

Hunters will win if they manage to kill all escapees. And the escapees will succeed once they reach the safehouse without getting shot.

King of the Hill

This game must be played in two teams with a large number of players. Each team should have at least nine players to defend each side of the hill. The designated hill should be any structure, building, or natural hill.

The defense team will stay on the hill to defend it from attackers, while the offensive team must remain outside the hill’s perimeter to wait for the attack and steal the structure.

The game will be timed for at least ten to fifteen minutes. After the time runs out, the team with the most standing players wins the round and will occupy the hill in the next game. The couple who won the most matches will be the winner, known as the “King of the Hill.”

This activity is somehow similar to skirmishes only without taking any hits from a participating player. In other words, plinking is like a target practice exercise where you will put a target object as far as possible from the shooting place.

You can add extra rules to make plinking more exciting. For example, whoever shoots the most targets at a given time wins. In most cases, plinking is a way for airsoft gun players to practice their shooting skills or sometimes test their weapons after a tune-up or a competition.

If you are a newbie in airsoft games, it is best to prepare with some plinking drills. A stationary target should help novices gain confidence and learn basic gun handling before entering any skirmishes.

Airsoft guns are popular tools for training simulations in police or military academies.

There were cases of accidental injuries or death among trainees by loading real bullets instead of blank magazines during a drill. To prevent this, academies started to use airsoft guns since they closely resemble the features and characteristics of a regular weapon.

Here is a list of some of these training simulations:

In most cases, police or military institutions use airsoft guns to train students with gun handling, muscle memory, and shooting capabilities. As a result, training simulations have become safer and effective. Different countries are now adopting airsoft guns for training purposes.

Similar to training simulations in police or military academies, the film industry also needed a safe way to make action scenes without injuring anyone.

As a result, the film and theater industry started to use airsoft guns in the 1990s. This was in response to the accidental death of Brandon Lee, the son of Bruce Lee, who was killed during an on-set shooting scene.

Fans and citizens were shocked about the news and never expected such an accident from a production studio. It was a hard lesson for all movie or theater industrialists in using real weapons.

In addition, airsoft guns are more affordable than regular rifles or pistols when producing a film. That’s because BBs, main guns, and other accessories are far more affordable.

The cost savings become more significant when a specific scene needs to be repeated over; operational expenses shoot sky-high when regular guns are used. So, to make the movie production more cost-effective, airsoft guns are a superior choice.

On the plus side, viewers can never tell the difference between a regular gun and an airsoft gun from a live observation and all the more from a movie.

Since airsoft guns could fire up to 650 FPS, they could be used as an excellent option for pest control. The safest airsoft FPS in the US is between 350-400; anything above this range could potentially harm the players. With this said, an airsoft gun is powerful enough to kill pests, such as cockroaches, rats, and other insects.

If you are having problems with mice and insects wandering around your lawn, using an airsoft gun with a higher FPS is an excellent way to exterminate them. Using airsoft guns with more than 500 FPS is your best choice since it could get the job done quicker. On the other hand, an average FPS airsoft gun could end up torturing the little critter instead of outright killing it.

Pest control with your airsoft gun is already an enjoyable activity you can do while getting rid of critters destroying your lawn. But if you want to take your shooting skills to the next level and exercise it in a more professional way, you can consider using your airsoft gun to hunt small games.

A perfect place to hunt small game is in New Jersey.

During small game seasons in the city, you can hunt squirrels and rabbits with your airsoft gun as long as it is within the allowed classification, which is between .177 and .22 caliber. Furthermore, you only need to use a basic firearm license to participate in this event.

To be efficient in the field, you need to use an airsoft gun with a muzzle velocity of at least 600 FPS; this is also to avoid torturing the small critters instead of outright killing them.

Here are some of the reasons why an airsoft gun is a great weapon of choice for self defense:

If you’re looking for an ideal airsoft gun for self-defense, I recommend the Glock 19 Gen3 Air Pistol on Amazon.com. This air pistol is an excellent replica of a Glock 19 pistol made in plastic. 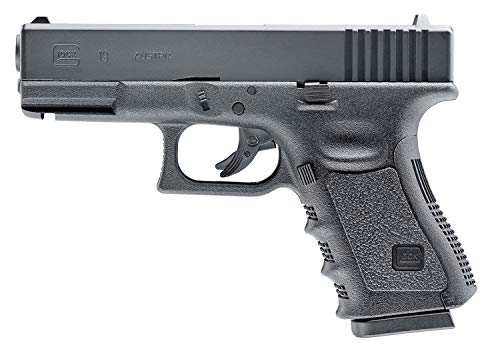 Its appearance makes it a powerful weapon for self-defense since it looks exactly like an actual gun, which is perfect to scare intruders. In addition, this replica shoots .177 caliber steel BBS and can fire up to 410 FPS – powerful enough to cause slight injuries and bruises to the body.

Airsoft guns were initially created for recreation and leisure purposes. But, as time went by, they became more sophisticated and resemble the features and characteristics of a regular gun. Therefore, airsoft gun users and organizations also developed activities where they can fully use the functions of an airsoft gun.

Different groups ranging from private organizations to governments now use airsoft guns worldwide. They have become a truly remarkable invention that lets people have fun and train.