East Asia was the primary origin of the famous airsoft guns; specifically, Japan produced the genesis of airsoft guns way back in the 1970s. But before, airsoft was mainly powered by springs shooting 6 mm (0.23 in) pellets or commonly known as BBs. It then gained modernization by switching to electric airsoft guns.

Electric airsoft guns work by using different parts, such as the piston, spring, and motor, working together to shoot a BB through its barrel. Rechargeable battery packs supply power to the internal electric motor. The motor allows the gearbox to compress the pump spring to shoot the bullets.

The Energies That Make an Electric Airsoft Gun Work

Though airsoft guns do the same function as one another, they differ in the process and power. So instead of just thinking about shooting BBs as a whole, we must know these details before fully engaging ourselves in purchasing one.

We need to understand that electric airsoft guns use three energy types – electrical, pneumatic, and mechanical. Again, as we mentioned, these types of energy work hand-in-hand to fully function as an electric airsoft gun. Fortunately, you can use this as a note to help you deduce the main problem.

Here are the typical functions of each energy inside an airsoft gun:

Like I’ve mentioned, a typical electric airsoft works hand-in-hand with different forms of energy to function correctly. The correct arrangement of parts inside will simultaneously work to shoot out a BB from the nozzle once you pull that trigger.

Now you know the core parts of an electric airsoft gun; let’s dissect how it shoots a BB right from the moment we pull the trigger up to the BB coming out from the air nozzle.

The electric airsoft gun has a battery and a motor, which mainly connects to the bevel gear. Once the trigger has been pulled, it will signal the battery to provide power to the motor.

The motor will start the bevel gear, allowing it to move the spur gear and then the third gear – the sector gear. Once the sector gear starts moving, it will retract the piston from its cylinder to fully compress the spring.

Once the sector gear finally releases the piston, the spring will shoot the piston back to its cylinder. The piston returning inside the cylinder will push pressurized air out of the air nozzle, which will lead to fully firing the BB out.

If we review the whole process, we can see where the change from electrical to mechanical energy led to pneumatic energy.

The trigger’s pull mainly sent electrical signals to the battery, causing the electrical energy change to mechanical energy. Due to the battery power, the motor started the movement of the gears and finally ended with pressurized air shooting the BB afar, which is the pneumatic energy.

Features of an Electric Airsoft Gun

Full automation is only available if you own an electric airsoft gun or a gas-powered gun. So getting an electric one is a clear choice if you’re looking for a full-auto feature, but it will still fully depend on your preference.

If you plan to buy your first electric airsoft gun, I recommend the Game Face GFAP 13 on Amazon.com. It shoots 6 mm (0.23 in) bullets at 250 FPS through its barrel and has a durable gearbox powered by a rechargeable battery pack.

Purchasing this airsoft gun comes in a set, which includes a battery, charger, and 30 round magazine. 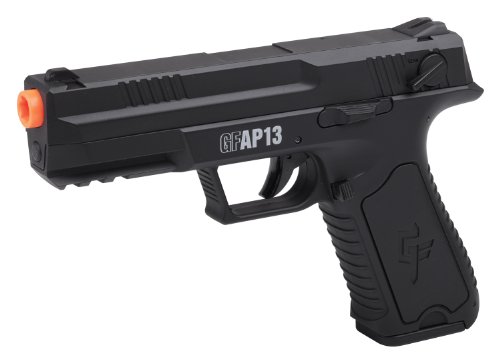 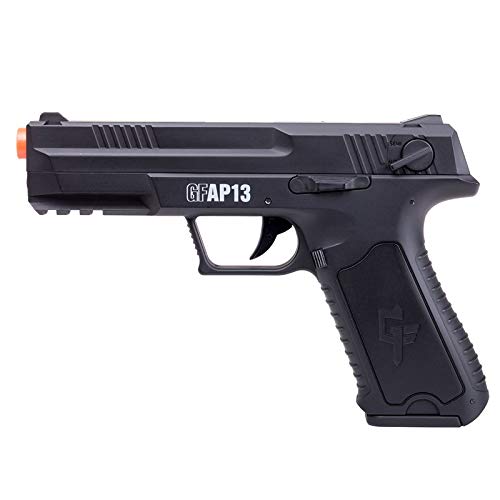 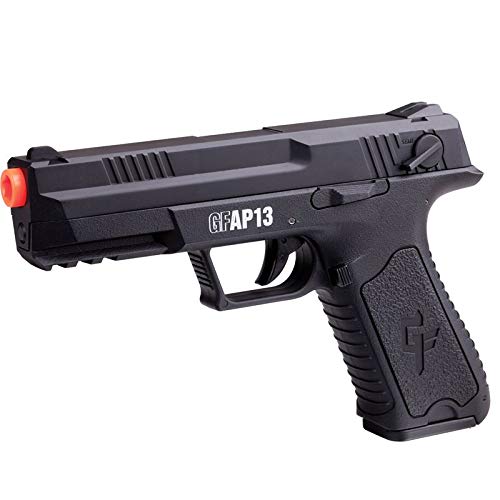 As we discussed the energy responsible for airsoft gun parts’ movements, we also need to understand the main components that make an airsoft gun. This section of the article will see the typical features inside once you decide to disassemble it.

It’s not required to know every part or component of your airsoft gun. Still, it’s a great plus if you know your way around your weapon since you’ll not have a professional available to speak regarding your airsoft gun every time. It may take time to remember the core parts, but trust me, it’s worth the time, especially if you need to look for a specific part for your gun.

Difference Between Gas-Powered and Electric Airsoft

The main difference between the two is how they fire the BB out of the chamber. The gas-powered airsoft gun uses a compressed gas reservoir to shoot a BB out the nozzle entirely.

While on the other hand, the electric airsoft uses a battery to trigger the spring and piston in creating pressurized air for the BB. Though there are pros and cons for both sectors, it will still depend on your preference in which one you’ll be getting.

Pros and Cons of Using an Electric Airsoft Gun

Being powered by an electric motor with a rechargeable battery makes it versatile for almost any condition. One selling point of having an electric airsoft gun gives you the advantage of charging and swapping batteries to continue firing.

Furthermore, using rechargeable battery packs is a lot more affordable compared to gas-powered airsoft guns. This is an important factor to take note of, especially if you are looking for a quality product at a lower price.

Moreover, electric-powered airsoft guns are also often known for their tactical appearance. Its bulky design and sturdy looks make it more appealing to the masses. So if you are aiming for performance, cost, and style, purchasing an electric airsoft gun is an excellent choice.

Though the electric airsoft guns may seem the superior choice among the three, it still has its drawbacks when it comes to usage.

One of the most common issues of electric airsoft guns is that they tend to lag when wet. If this happens, you’ll have short delays or won’t be able to shoot BBs, so it is not the best choice to use in wet fields.

Lastly, since an electric airsoft gun is powered with a battery pack, you’ll become powerless once your battery dies. A spare battery is often the solution to prevent such problems, but changing batteries in the airsoft field is risky and time-consuming.

Once you familiarize yourself with an electric airsoft gun’s main functions and parts, it can serve as an added skill for you to self-repair your own gear. However, if you don’t feel comfortable fixing or maybe simply taking it apart, it is best to consult a professional to avoid any mishaps with your gun.

Remember, even though it’s a replica of the actual thing, you still need to take full caution upon handling the gun. Getting to any gun-related accidents is the last thing you would want, even if you’re holding a replica.