Gas Blowback airsoft guns are a type of gun that uses gas to propel the BB and are heavier than spring-powered airsoft guns. Arguably, most people love them for the kickback they have when shot. But the question is, are these gun types worth it?

Gas blowback airsoft guns are worth it. These guns offer a realistic kick with each shot and an enjoyable, consistent firing sound, creating the authentic feel of a firearm. Besides, they offer a higher muzzle velocity and are quieter than spring or electric guns.

Read on for more details on the benefits of these gun types, their cons, and answers to some frequently asked questions relating to this topic.

Gas blowback airsoft guns offer several benefits that give them an edge over spring and electric guns. These pros include:

If you’re looking for realism, these guns provide it with every shot being accompanied by a kickback effect that makes them feel like the real thing: you’ll feel the weight of the weapon in your hands and a slight kickback every time you shoot.

Here’s a video that shows how realistic these guns can get:

Faster muzzle velocity gives gas blowbacks an edge when it comes to taking down opponents. The high-velocity rounds can be fired with more accuracy and power, making them a great option for players looking for the best of both worlds.

Therefore, if you’re playing in an area where stealth is important to your strategy, gas blowbacks are the right choice for you.

These guns support semi-automatic and fully automatic operation, so you can have the option of shooting a single shot or holding down the trigger to fire your gun continuously. This gives you an advantage in battle, as it can help you take down opponents quickly.

Gas blowbacks often have a tighter barrel, which means the guns are more accurate and easier to shoot. Therefore, if you’re looking for a sniper rifle replacement, gas blowbacks are the right option.

If you’re in the market for a quality airsoft gun, I recommend getting this Umarex Glock Airsoft BB Pistol from Amazon.com. It comes with realistic blowback action, a polymer frame for durability, and an ergonomic grip. 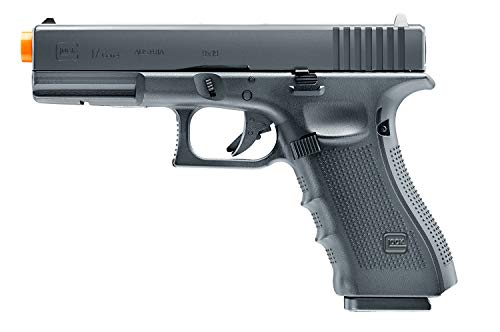 Gas-powered guns like these generally cost more than spring or electric airsoft weapons. If money is tight and you want to save some dough while still getting an authentic feel from your gun, spring-powered guns are a better option for you.

Gas blowbacks are heavier than other airsoft guns, and as such, they might not be the best option for players who want to run around a lot. They will also require more effort in carrying them from place to place than lighter ones would.

Gas blowbacks require more maintenance than other airsoft guns, as they are more prone to get dirty and need a thorough cleaning after each usage. Additionally, these guns have an increased chance of breaking in half if not handled properly.

Gas-powered guns like these generally have a lower magazine capacity than other airsoft gun types. This means that you’ll need to reload more often, which can be an issue if you’re in the middle of a battle and out of ammo.

This type of gun needs gas to work: you’ll need to refill the magazine with gas before every game, which might not be a problem if you have access to an airsoft store nearby.

It’s worth noting that this will take time and money from your budget for each use. However, it is necessary so that reloading won’t become too much trouble.

If you plan on playing with these guns in a cold environment, they won’t perform as well. At lower temperatures, the mechanism of the weapon might cool down.

This slows down the firing rate and range. Besides, if the propellant freezes, it could slow down and damage the gun.

I have written an in detail article that compares half blowback vs. full blowback airsoft guns. You can find article on this link.

Are Gas Blowback Airsoft Guns Worth It? The Verdict

While they are heavier than spring-powered guns and require more maintenance, the advantages of gas blowback airsoft guns make them worth it. If you are looking for a heavy, powerful weapon that provides an authentic feel and shoots with a realistic recoil In that case, these guns are worth the investment.

Both types of airsoft guns are excellent, with their pros and cons. Notably, electric guns have a faster trigger response, while gas-powered ones are faster due to their automatic features. Similarly, gas guns have a lower magazine capacity, while electric ones can’t sustain prolonged battles.

On the other hand, electric models seem better suited for someone who is not interested in spending as much on gun upkeep and is primarily concerned with performance over longevity due to the reduced need for heavy maintenance, which can be tedious without proper tools or knowledge.

Blow-back and non-blowback airsoft guns are equally good. Blowback pistols are more realistic as they have recoil, which translates to feel and sound that feels like the weapon is firing rounds instead of cycling a slide. On the other hand, non-blowbacks are gas efficient and deliver much higher FPS on average.

If you are looking for a more realistic airsoft experience, a gas blowback gun might be what you need. It provides a higher muzzle velocity and more powerful recoil while also being quieter in operation.

With semi-and-fully automatic capabilities and accurate shooting, these guns are perfect for target practice enthusiasts who want to get used to firing on targets with speed and accuracy. The main downside of this type of airsoft weapon is its high cost, making it prohibitively expensive.