Airsoft guns and gel blasters are excellent guns used in competitive military-style shooting games. If you enjoy these shooting games, you’ll probably be curious to know the differences between the two guns, and that’s what this article is about.

Airsoft guns are non-powder guns that shoot plastic pellets. They look like real-life traditional guns and are used in games, firearm training, and movie props. On the other hand, Gel blasters use projectiles called gel pellets, which are generally considered a safer alternative to plastic pallets.

We’ll take a deeper dive into these two types of guns, looking at how they work, their pros and cons to enable you to form a better opinion on which one you should go for. Read on to find out more.

Airsoft is a military simulation sport that involves players using specialized guns to shoot rubber or plastic pellets at opponents. Airsoft guns are generally classified based on how they’re powered: Automatic Electric Guns (AEGs), gas-powered, and spring-powered . No matter the type of power used, airsoft guns are designed to shoot projectiles at low muzzle energy ratings.

Airsoft guns are designed to look a lot like real-life guns. However, they have a bright orange muzzle to differentiate them from real firearms. Most experienced players can quickly tell the difference between airsoft guns and guns that are not designed for the sport. The plastic pellets usually come in white color, with a standard size of about 6mm (0.24 in) and different weights.

Your choice of weight would usually be determined by the kind of gun you’re using. For example, spring-powered guns have a lesser power force, around 250 ft/s (76 m/s), and lighter pellets will be suitable for this model.

On the other hand, automatic electric guns have a powerful force of around 400-600 ft/s (122-183 m/s), and heavier bullets will have enough support from the gun to fight winds and reach longer ranges.  Generally, airsoft guns run at 350-500 ft/s (107-152 m/s), and you can upgrade most air guns to increase pellet velocity, accuracy, capacity, etc.

Pellets come in either biodegradable or non-biodegradable materials. Biodegradable pallets are typically made with a type of plastic polymer called polylactide, which breaks down when exposed to carbon dioxide and water. However, they tend to be more expensive.

Every outdoor gamer knows that airsoft is an enjoyable gun. Irrespective of what powers your airsoft gun, you’ll enjoy some outstanding benefits from it. Some of the most popular benefits of airsoft guns include:

Just like every other thing, airsoft guns have their disadvantages. Before buying one, it’s crucial that you understand the drawbacks to expect and how to mitigate them.

As we’ve stated earlier, there are three common types of airsoft guns; spring guns, AEGs, and gas-powered guns. Let’s review the working process of each of these guns.

This type of gun uses coil springs to store energy and also absorb shock. The firing mechanism is unique as it uses spring action. However, the weapon must be manually cocked every time you want to shoot. This working mechanism has its advantages and disadvantages. For instance, it’s the safest option for newbies that are still trying to understand the sport.

Spring guns are designed to feature lower shooting velocity. They come as pistols, shotguns, and bolt action rifles. One of its most significant advantages over the other two is its ability to function efficiently at any temperature; cold, wet, hot, or dry, making it reliable. Batteries and gas guns would be adversely affected by low temperatures and water.

This type of gun shoots just like a spring gun. However, you won’t need to manually cock the gun every time you want to shoot. Instead, it uses rechargeable batteries to power the electric motor that compresses the spring pumps to shoot.

AEGs offer both semi-automatic and automatic firing mechanisms. These firing mechanisms mean that they function like actual rifles. However, they’re usually stealthy and quiet, with muzzle velocities of 150-650 ft/s (46-198m/s).

They have the advantage of shooting 100-1500 rounds per minute and offer a great experience. However, because they use electricity, they’re not ideal for use under wet conditions.

Like the name denotes, gas-powered airsoft guns are powered by gas. They use different gases such as CO2, propane, or green gas (a combination of propane and silicone oil).  The gas canisters are located in the magazine. Every pull of the trigger would release the gas, which would pass through a series of valves and propels the pellets forward.

Gas-powered airsoft guns are capable of both automatic and semi-automatic action, just like real-life shotguns. On the flipside, distributing and regulating gas involves a lot of mechanical complexities. As a result, they have almost become obsolete, giving way to AEGs.

Another disadvantage of the gas-powered gun is that it’s adversely affected by extreme weather conditions. For example, in severely cold weather, the gas can freeze, making the gun malfunction. Also, power is unlimited, and players must often carry spares when playing longer games.

You’ll also find gel blasters that are powered by gas. This type of gel blaster uses refrigerant gases such as propane, R-134a, and HFC-152a, which are typically less explosive, with high energy efficiency, and will not deplete ozone (ozone friendly).

Gel blasters differ from airsoft guns in the type of ammunition and the firing power that they feature. The projectiles shot by gel blasters are called gel pellets which are usually super absorbent polymers such as sodium polyacrylate.

The gel pellets are typically tiny and require soaking in water, where they absorb water and become more significant in size up to 7-8mm (0.27-0.3 in). Gel pellets are non-toxic, environmentally friendly, and biodegradable, breaking down almost immediately because of their high water content.

Like airsoft guns, gel blasters have several advantages. Here, let’s review some of these advantages.

Gel blasters come with some disadvantages, which we’ll discuss in this section.

Note. You can store gel pellets in a tightly closed container for up to two weeks, preferably in a refrigerator, to prevent shrinking. Also, it’s best to soak it overnight to maximize time. 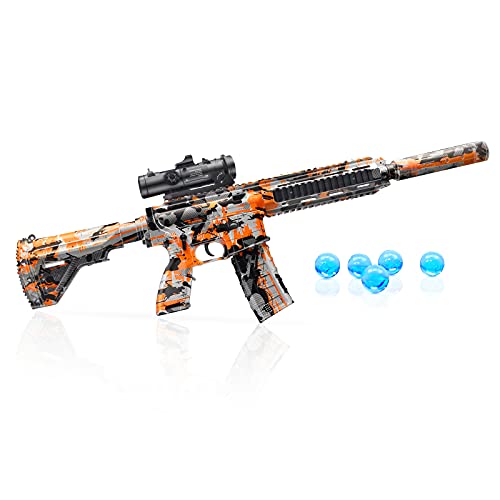 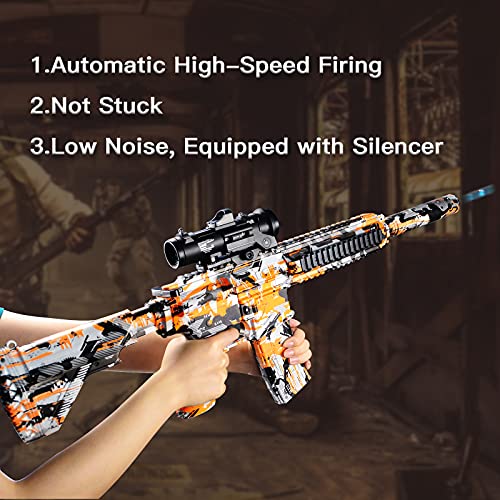 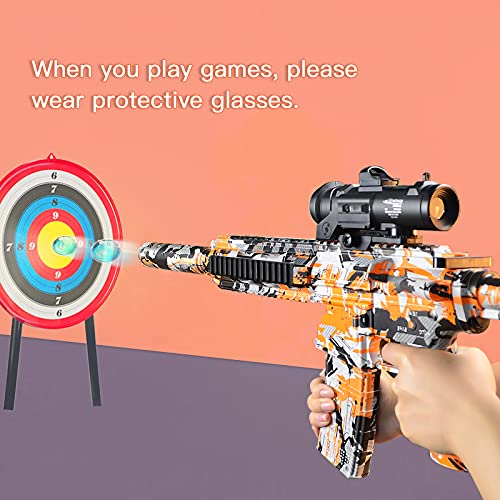 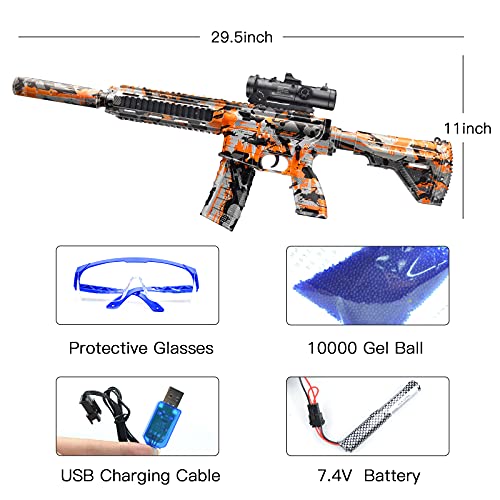 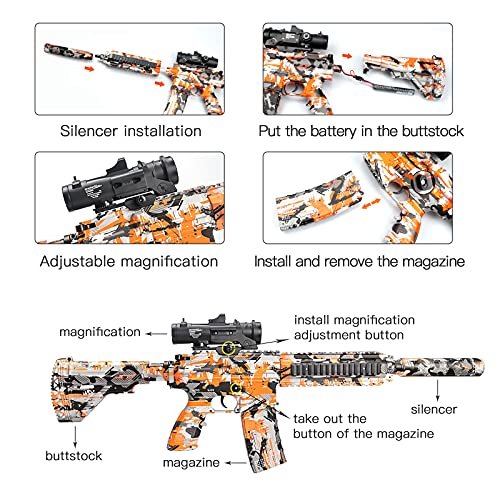 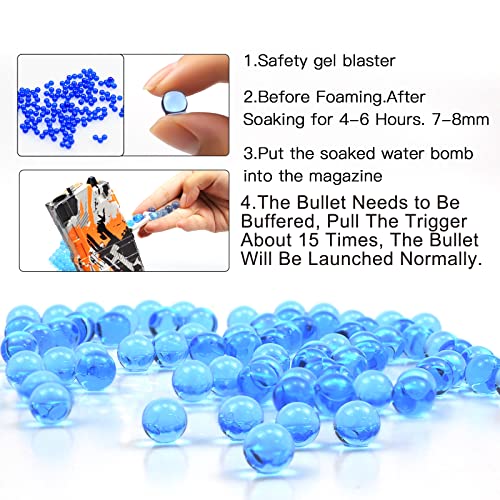 Airsoft Guns vs. Gel Blasters: Which One Should You Choose?

You should choose airsoft guns if you want an overall gun-handling experience that’s very close to the real thing. However, if safety is of the utmost importance, gel blasters are the better option to go with.

Airsoft guns and gel blasters are weapons used to play military simulation-type games. Each of them features unique advantages and disadvantages. The biggest concern of using both guns is safety.

Airsoft guns look exactly like a replica of real-life guns with a greater force power, offering a better and more realistic gaming experience. However, when it comes to safety, they’re often mistaken for real-life guns even by trained professionals and can lead to fatalities.

On the other hand, gel blasters are considered a safer alternative to airsoft guns. Gel blasters will only leave short-lived pain when it comes in contact with exposed skin. They also don’t cause significant injuries when you wear protective eyewear and padded clothing. However, gel blasters don’t have enough power force compared to airsoft guns.

Airsoft guns and gel blasters are similar to each other in design and firing mechanism. However, airsoft guns have the edge over gel blasters in power, accuracy, and range, giving it a more realistic feel, usually suitable for advanced competitions or organized tournaments.

Gel blasters are safer and will not break the skin, making them less painful and ideal for family use. They’re also environmentally friendly and biodegradable.