Gas-powered air rifles are among the newest technologies for airsoft guns. Co2 is one of the most popular types of gases used today to fire airsoft guns. Tanks using carbon dioxide are affordable and easy to operate.

Here are 8 reasons why airsoft guns use co2:

We’ll discuss several reasons for carbon dioxide’s popularity in this article. Read on if choosing Co2 cartridges might be a good option for you!

Some airsoft guns are operated by a spring, which releases tension causing the projectile to shoot out. Other guns propel the bb through the use of pneumatics. Both of these are effective ways to cause an airsoft gun to fire, but they require a lot of strength to operate, and after a few shots, you’re feeling it. Airsoft guns that use Co2 cartridges alleviate the strain on the body that these other methods of propulsion cause.

Kick is a term used to describe the motion a gun makes when fired. The faster the projectile leaves the barrel, the harder the gun will kick, and the shot will travel more quickly. Carbon dioxide is higher pressure than other options. This higher pressure makes the shot more powerful.

Co2 comes in a self-contained cartridge. Because of this, extreme temperature variations don’t affect the gun’s operation as much as other types of propellants can be. Carbon dioxide canister-powered guns specifically outperform other methods in colder temperatures.

Co2 cartridges are usually around one dollar each. You can get anywhere from 30-50 shots out of a cartridge before it needs changes, making it a reasonably economical way to power an airsoft gun.  You can often find them for less than one dollar each when you catch them on sale, or buy in bulk. 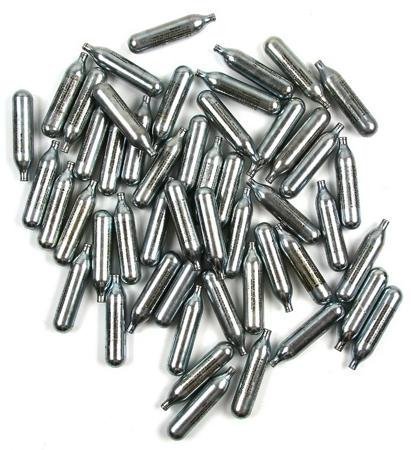 4. No Cocking or Pumping Required

Every type of gas will react differently under pressure. On a spring-loaded gun, as the hammer is cocked, gas is released. When the trigger is pulled, the pressurized air causes the projectile to shoot out of the barrel.

With a pneumatic or pump-style gun, the air is pressurized as the gun is pumped. When the trigger is pulled, that pressurized air is released, and the projectile is propelled forward. These methods are labor-intense and can cause fatigue quickly, which is no fun when you’re in a longer match.

Carbon dioxide or Co2 canister-powered guns release pressure from the canister much more quickly, which causes an explosion in the weapon’s chamber, resulting in a more powerful shot.

5. Can Be Used in Semi and Fully Automatic Airsoft Guns

Spring and pump-powered guns must be recharged after every shot. Co2 canister-powered guns can fire several consecutive shots before you need to replace the canister. You should be able to get between 30 and 50 shots out of a single Co2 cartridge before it needs to be changed. Stay around 50 when the weather you’re shooting in isn’t overly cold.

This is a feature not available on all airsoft guns, but if you’re looking for the feel of firing a real weapon, it can be worth the extra cost. When firing an airsoft blowback gun, you will get the recoil effect of a real gun.

The slide will move with each shot, just like a conventional gun that shoots real ammunition. People often choose Co2 canister-powered airsoft guns because they love the realism.

Carbon dioxide cartridges are small and compact. Therefore, they are convenient to store large quantities of cartridges at a time. Co2 cartridges also usually come packaged neatly in a sturdy box. If you leave them in the box, they can be stacked and can stay organized and easy to access.

Co2 cartridges can be easier to find than other types of gas used to power airsoft guns. Most Sporting goods stores have them in stock much more frequently than other forms of gas. Co2 cartridges can also be found at big chain stores such as Wal-Mart and other similar stores.

There are pros and cons to everything in life, and choosing carbon dioxide as a fuel for your airsoft gun is no exception. Check out this list of pros and cons for the use of Co2 cartridges:

If you’re looking for a realistic feel and a high velocity-firing weapon, you can’t go wrong with Co2 cartridge-powered airsoft guns. Most models are well-constructed and durable, making them a good choice for many airsoft players out there.

Moreover, when using Co2 cartridge-powered airsoft guns, there are many upgrades out there if you want to try out different things.

Whatever you choose to use as a propellant for your bbs when using airsoft guns, whether you are alone or with your friends, remember to be safe and have fun!